The week started slowly with three days of no training. And finished with a four-day cram and my 3rd Half Marathon of 2018.

In my last post, which I wrote half way through week nine on Wednesday night, I talked about the lack of training, due to work and family and life. Writing it down helped get me motivated – and I’m accountable – so with just four days left I had a renewed sense of purpose on Thursday morning kicking off the week then with a treadmill run and finishing on Sunday with a half marathon.

The crazy session was 17-miles on the treadmill. I’d been inspired by fellow Endurance Woman Wendy Oates, who had shared her 18 mile treadmill run with the Facebook Group. Energised, I realised there was really no excuse, and the Beast from the East wasn’t getting through the doors of Withdean Stadium gym. I’m not a treadmill fan. The longest I’ve run in the past is around 10 to 15 miles. But, I found the experience really useful at this stage in training. For one, as my meditation course was drawing to a close on Thursday night, it gave me an opportunity to consolidate what I’ve learnt, and to practise mindful running. I find my biggest issue on the treadmill is a wandering (bored) mind. I get obsessed with numbers, time drags and my RPE is much higher relative to running outside. But, once I started to run in the moment I realised I felt fine, it wasn’t difficult, the pace was right for a long run, and I’m only where my mind is whether I’m up on the Downs or staring at the gym car park and listening to Absolute Radio. I believe all of this is good training for an endurance athlete, so with accountability in mind, I commit to the following:

I will do a long treadmill run once a month in the run up to IM (that’s six more sessions from April).

There was snow stopping Wendy – and she inspired me!

Ignoring all sensible advice and what I know about training and performance, I decided to follow Thursday with a hard FTP /Ramp test on the bike with the Bri Tri Club on Friday morning at 645am. Ideally, any test of V02 Max (which essentially is what the test measures)  should be performed when an athlete is well-rested. But at the moment I think it doesn’t really matter. I wanted a rough idea, and I think the test was fairly accurate. The problem with doing back to back hard sessions isn’t so much the short-term, it’s the longer term impact on recovery. But in my mind the psychological damage of not doing what I  had planned would have been worse. As it goes as I’m a fairly average cyclist so the test didn’t go on for very long,  but I do have a benchmark from which I can measure my bike fitness – and an incentive to get on my bike. For anyone who’s an expert in FTP and Ramp tests (I know that there is a difference) and the sports scientists among you, I’m still learning about the variables, so don’t want to give any incorrect information. I did the Ramp Test on a My Ride bike at the gym, and from this I can train in colour zones/intensity relative to me: https://www.teamicg.com/is/bikes/ic7/wattrate. My score was 159 which if I divide by 55.5Kg (my weight) gives me this score, 2.86 which is my watts/kg.

Tri Training: Trying to fit it all in

I had hoped to fit in another bike session, but tiredness did kick in, so on Saturday I ran an easy five miles and swam 2.5K at a steady pace. Then on Sunday, on a mission to race myself fit I took on the Eastbourne Half Marathon, revisiting the town I left in August last year.

The treadmill session, FTP test and the 2.5K swim did catch up with me. The half marathon was perfectly manageable, but there was nothing in me that would let me race. I crawled up the infamous hill (9.27)  and decided to try to get it back by picking up the pace to a nice 6.44 on the down. When I reached the seafront I decided to race and try to catch the women ahead, which I did… but not for long. In the past (or when I’m rested) I can inject some speed in a race and then go back to the pace the other runner was at and stay ahead, in this case 7.22 to overtake, and then back to just under 7.30. But it didn’t go to plan. Yes, I was quite happy at 7.22 for one mile, but rather than settle back to 7.30 for the rest of the race, I only managed one mile at 7.30.  Once I realised I was slowing down, I consciously decided to stop racing and just run the race at a tempo pace, which turned out to be an average of 7.54 for the remaining six miles and a race average of 7.47, which for where I’m at now was just fine. I followed the race with a 1K swim and sauna (surprisingly I had achy arms when swimming not legs) – and had a satisfying Sunday lunch and complete crash, rounding off another week’s training. 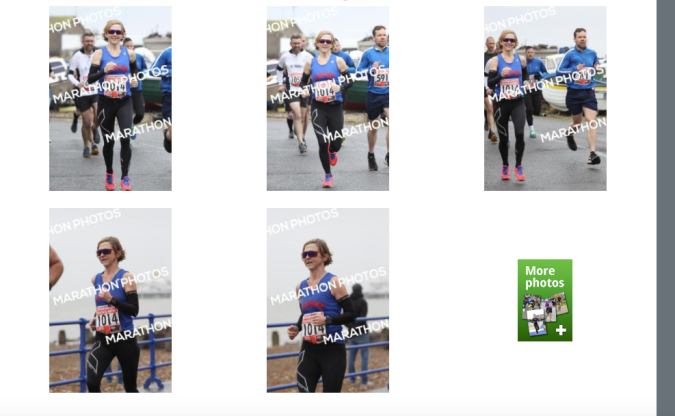