I’ve adapted my plan and with the help of the Turbo and Zwift, I’m still keeping the Ironman goal in mind.

I’m trying to focus on what I am doing – and not what I’m not doing/or haven’t done. The positives are plenty this week.  I’m really glad to be back swimming properly, albeit slowly.  I’ve also managed some running sling-free but had to keep the sling on for a long off-road run, and I’m covering some ground on the Turbo, ticking off eight sweaty spin hours this week.

The week has gone very quickly and today’s post is a shorter one. I last blogged midway through this week, having already completed Monday and Tuesday’s turbo sessions using Zwift and I’d got back in the pool and sort of swum for 750M.

On Wednesday morning I got straight on the bike and did Marianne’s session, switching between the heavier gear and 65RPM and easier gear and 85RPM. This was followed by the prescribed brick run, which was 10K easy, moderate, harder in 10 minute blocks (roughly). I finished the last block with a sub 7.30 mile, which felt like progress with my sling (I was in and out of the sling). Thursday was a day off, but Ciara and I went for a late session at the pool, and I did fit in an easy swim and managed 600M full crawl stroke and another 600 or so of drills.

By Friday I was ready to go again and did my planned long bike ride (I’d swapped from long run to long bike due to the weather), followed by an hour brick run. The ride was on the turbo and was broken up as one  hour continous, then 10 minutes on a Zwift route which I abandoned as I found it very dull, followed finally by an uninterrupted 2’10 sweet spot training session with long bouts in the tuck position on my TT bike.

Innsbruck, a tiny corner of my living room… who cares it’s a workout!

On Saturday, I was back on the bike again! See below… Trying to convince myself it was fun. After the ride I went for a sea swim, and it was blissful to be able to swim continuously for 1500M. I didn’t have a wetsuit because the logistics of getting it on and off, well, I didn’t want to go there, so I was in my Zone 3 two-piece. After 35 minutes I was feeling cold, but, it was a double celebration as I had wanted to see what I could do without (well almost without) a wetsuit. After Saturday’s training I had a lovely lunch at the Hospital Club with my very old friend, Sarah (i.e. we’ve been friends a long time, she’s not a pensioner). My shoulder ached a lot as I made my way though the crowds of Covent Garden, and I was happy to have an early night on Saturday.

Sunday was long run day! And it was a slow start. The good thing is I had my sister and niece coming to visit, so I had a deadline. But I did manage a good hour of procrastination. 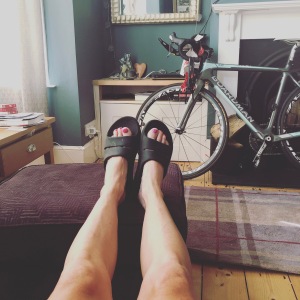 Procrastination… Guilty, but reading Eat that Frog (check it out)

The run was hard work. It’s been a long time since I’ve gone long, or off-road, and it’s true with running, if you do’t use it, you lose it! My shoulder was achy so sling-free wasn’t really an option. I’d decided to go off-road, and hadn’t really thought about the one-armed affect when negotiating flint paths, and hills. In the woods, I was looking down at branches and potential trip hazards and as I hadn’t seen where I was going, I got properly lost. The map looked like one you’d see on Bear Grill’s The Island, when the contestants take completely the wrong route in search of the sea!

We’re going on a bear hunt!

I also did a cow-avoidance diversion (regular for me on long runs). They were assembled in the middle of a path in the field to Ditchling. Some mountain bikers ahead had gone right through them, so I braced myself. I stopped running as I got close and I even said hello! But one of them was ‘staring me out’ and I decided to say goodbye and then take the longer, steeper route in the field. I need to deal with my cow phobia. The run continued on the South Downs Way, the lovely bit between Ditchling Beacon and Devil’s Dyke. However, on reaching the A23 path, and the hills to take me the Dyke, I decided to take the flatter path to home as my shoulder was fed up wit the hills. So the last five miles of my run were alongside a motorway – I genuinely wouldn’t have been surprised if someone reported mad woman seen alongside motorway with sling on the news. However, I reminded myself that the mentally challenging sessions (turob, motorway runs) are all good mind-training for the day long IM coming up in eight weeks time!

Losing my marbles (and Tri accessories)

I’m writing this at the start of Week eight. Virtually every day I have to spend 20 minutes searching for some missing piece of equipment (goggles, floats, cossie, heart rate monitor, watch etc.). Today, the missing piece is the long bit that attaches the Chill Swim bag to me! And so another week starts….